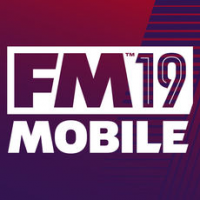 Sega has spoiled us with its Football Manager. And it keeps on: FM 2019 Mobile is even greater than it used to be.

Football manager games are a special sort. You don’t even have to look at the stadium (though you will, we know), but you have to be well aware who is who. You are a manager of a virtual football team, trying to lead it to the championship in rather a real environment. You can opt for a well-known team with a reputation to keep, or make a bigger bet on an outsider club to make a champ out of this bottom dweller.

That is, you deal with 19 real national leagues including 56 clubs, exploiting (with all due licenses) real club and player names, logos, uniforms, appearances, and all the stuff. Now FM 2019 features even more informative player and club dossiers, containing all the info you need to account.

As you conduct a team, you form it, fortify it with stars or promising rookies, set training schedule to strengthen the shape, and react to incoming news. Among all the important things defining your tactics is probably the most important, as the way you play defines whether you win.

When you watch the game, it’s your decisions that define it. And, albeit you don’t interfere, all that happens on the field is your product. Make it great!

Suddenly, the game looks much more laconic than we could expect from the 1.2 GB-sized app. Most of this space will be eaten by pictures of players; yes, they are high quality, but the rest is chars and charts. You analyze tables, watch new deals, see notifications, calculate expenses and profits, and learn players’ skills to decide whether your team will benefit.

Maybe the most spectacular part of the game is licensed team kits. They help you in designing your team the way you like it, making it literally your dream team.

Choices, that’s what makes Football Manager games so attractive, swallowing your time hour by hour. You can try your skills with any team, and any contract or managing decision is a bifurcation point, forming an inexhaustible option array. So the season will start once again, and again, and again, and the game has all it takes not to offer a football Groundhog Day.

Though this game is advertised as a mobile version of the “full-sized” FM 2019, it doesn’t require any specific control. Just tap what you select; that’s it. Dealing with charts, contracts, schemes, schedules and all that stuff like that is easy. You won’t need to learn any specific movements; leave this to PES or FIFA.

It’s an adore-or-ignore kind of game; those fond of real-life football will surely notice it (though some prefer field simulators), but it’s definitely not for casual players. Sega Football Manager 2019 requires much from a player but rewards even more. If you’re new to this type of game, you better start with FM 2019 Touch, a simpler take on the same idea. 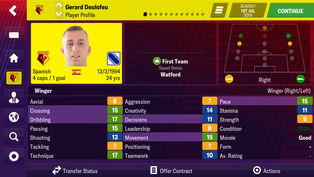 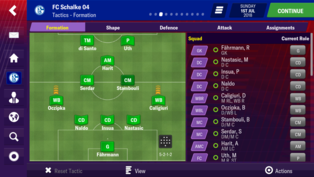