Water racing has been a popular material for a digital game due to simple mechanics and tons of fun to experience. Flippy Race is a boat racing game that tries to recreate its wet spirit in a narrow strait.

Flippy Race combines elements of the racing game with some features of endless runner (if you remember this genre popular in the early 2010s). Each level is a boat race with 23 virtual rivals you need to surpass. To accelerate your boat, you can turn on the engine by holding your finger, or make a flip in the air. There are trampolines that help you accelerate too, and obstacles that can sink your boat or just slow it down. And (oh sweet nostalgia!) there are coins above the water you for you to collect. It’s hard to believe this game was released in late 2018.

Flipping is an integral part of the game. Not only you speed up doing it; you also get rewarded for each flip, so you’re encouraged to do it as often as you can. But be careful: if your boat gets upside down, it will drown.

When you are the first to reach the finish line, you unlock the next level. You get rewards for each race as coins, and for completing daily missions, you get gems. Coins can be spent on upgrades of your current boat; gems can buy your new boats, better than your default one.

The game is as casual as can be, and probably that’s what makes it a good entertainment, except for the moments you need to watch an ad to go on. Even after you buy the ad-free version, they still pop up, offering more coins or gems.

As soon as you take a pause (when you’re thrown ashore or just finishing the level), you look around and see how rudely the game is drawn. The graphical part of it lacks details; it’s especially noticeable on tablets. Okay, shores and rival boats can be neglected, but we have seen water with its waves and whirls made much better in similar games. Here it looks too schematic, primitive, lacking the live experience. The rest is quite forgivable, but what we play these games for is breathing the summer again, isn’t it?

Not that there’s a lot of progress to gain and lose if you restart the game (though some might cherish their boat collection). Speed and water experience is the core of the pleasure Flippy Race delivers. And it remains the same on any level. If you want, you can connect your Facebook account, and your progress will be stored.

The game is simply swipe-controlled. Unlike those endless runners, you can’t help remembering, your boat moves freely in the strait, not just between three tracks. The boats respond to your gestures quickly, with no delay. Alas, you cannot activate motion control.

It would have been a great racing game, had it been drawn with a little more attention. We don’t even mind the ads, as they can be removed by buying an ad-free version. There’s only good to be said about mechanics and default controls, and the game runs smoothly on dated devices. But give us some better water, please! 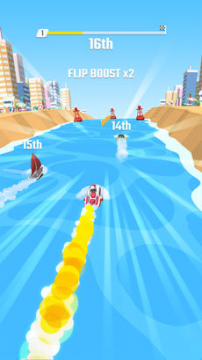 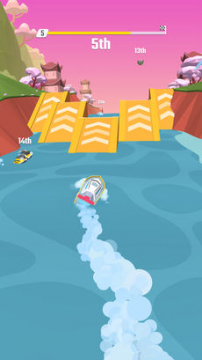