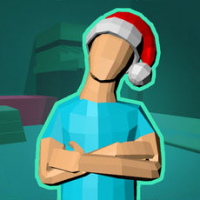 Sporting simulation games are a special sort of pleasure. In the Flip Trickster game, you’ll have to control an athlete making backflips. The mission is hard, but Never Give Up is the motto of sports. So try not to mind the way it looks and concentrate on the way it works.

So, your character is an athlete doing backflips in a gym. It offers special equipment for flipping backwards to the right position. The game analyses the way this trick is made and dares you to repeat it… digitally.

In three phases, containing crunching, a leap, and a backflip while you’re in the air, you need to calculate your motions so precisely as to land into the red zone and to hold the balance after you land. Nobody said it would be easy (though probably easier than doing the same trick in real life).

Well, landing in the grey zone is fine too. The app rates your results and decides whether it’s good enough to proceed to the next level. There are few levels, but don’t think you’re through as you see the familiar disposition. Flip Trickster offers you new missions, each one harder than the previous.

For precise movements you get coins that you can use, for example, to skip some hard level as you encounter unexpected problems.

Well, it’s visible, and that’s it. Physical puzzles neglect elaborate graphics often, and that’s the case with Flip Trickster. As abstract as can be, it pictures your Mr. Trickster as schematic as can be, with angles instead of smooth lines, and no face at all. But in fact, it doesn’t matter.

Neither do the ads, though they’re shown constantly. You just learn to ignore them after a level or two. Anyway, this sight is hard to make worse even with half screen ads.

The number of levels in this game is, alas, too limited. But each of them offers more and more missions as you proceed. You can return to the same level with a new task, like flipping double, landing in the red zone twice, and so on. Demands get harder, and so does your reward. But, frankly speaking, who cares about rewards when it’s all about the process?

The part that’s made perfectly is the controls. You hold the finger on the screen to do the crunch, release it to jump backwards, and then press again and hold to make a flip. As simple as it gets, it takes some noticeable time to get used to. But as you master it, trying a level over and over becomes fun, as you feel you get closer to the desired result.

If you like physical arcades so much that you’re ready to neglect probably the worst visuals possible in 2019, you found it. You know, the way you look means nothing against the way you feel, and even if you’ve got no face, you still can’t afford losing it. Don’t give up!