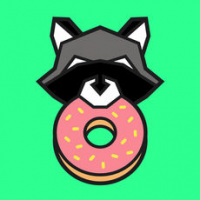 If you want something really unusual, something not exploiting the mechanics you’re sick and tired of, you’ve run into the right game. Donut County is one of the most original games, not resembling anything in the store. A fantastic adventure story meets strange and attractive gameplay, so you’ll like it underground!

So, there’s a strange town inhabited both by humans and animals. And there is a raccoon selling donuts, with a hole in each. You know, joking with holes is dangerous, as once it may get you 999 feet underground. But life goes on, and the arrogant raccoon accompanied with people and animals with strange names and strange habits uses this hole magic to drag useful objects or creatures down where they now dwell.

The mechanics of the game is similar to that of the famous Hole.io, but it’s modified to be more complicated and wrapped in a great absurd narrative. The objects you need to swallow with the hole are not static; they behave. Birds flying, snakes creeping, fish jumping in the water, bicycles move around, and large objects have their density and mass center, so you’ll have to try to catch them all in and drag down.

We don’t know what the author consumed while making this game, but we’re not sure we’d dare to try that stuff.

Reading Trashopedia is a special sort of pleasure. As ironic and absurd as the game itself, it contains a lot of information you will hardly use in the game (unlike other encyclopedias). But it will certainly pull lots of laughs out of you.

This strange game requires strange visuals, so all the objects and characters are drawn very rudely, with visible large triangles and unnatural colors. Yet they are alive, due to their almost Carrollian absurdity. Despite that, the game impresses, and it’s really fun to watch all these unnatural creatures speak, act and quarrel like they are our neighbors.

As for the sound, it combines jolly music and indistinct dialogs, dubbed by titles, so the game seems easy to translate to other languages, with no sound dubbing necessary and the original effect preserved.

Each level of this game offers a puzzle of its own. Along with the hole itself, you’ll need to apply fire and water, fireworks and the raccoon’s tail, and many other things that turn out useful suddenly. If you’re stuck at a level, you can restart it and try applying your imagination at its wildest. Not that the game is too difficult when you understand what a level requires. So replaying it is no fun, as things can only be discovered once.

Though you can replay the game to pay more attention to its details, from Trashopedia to nuances in the characters’ dialogs.

As easy as it looks, you need to drag the hole around, catching objects with it. It seems easy to understand, and even when you need to apply some trick, it’s done in the same manner. During dialogs, you just need to tap the screen to proceed to the next reply. There are buttons you’ll need to adjust settings or to replay the level.

Donut County is the game that gets you legally high. It’s invented somewhere beyond human imagination, brought to Earth by some alien civilization to get us rid of our obsessive rationality. There’s no other reason games like this exist. So don’t, hear that, don’t neglect a chance to try it. It’s really an altered state of mind, and for $4.99 only. 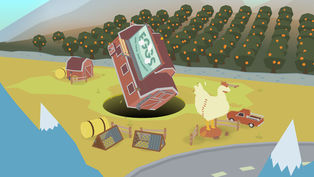 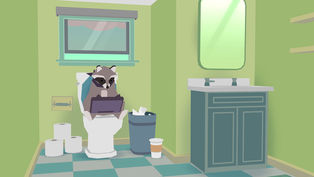